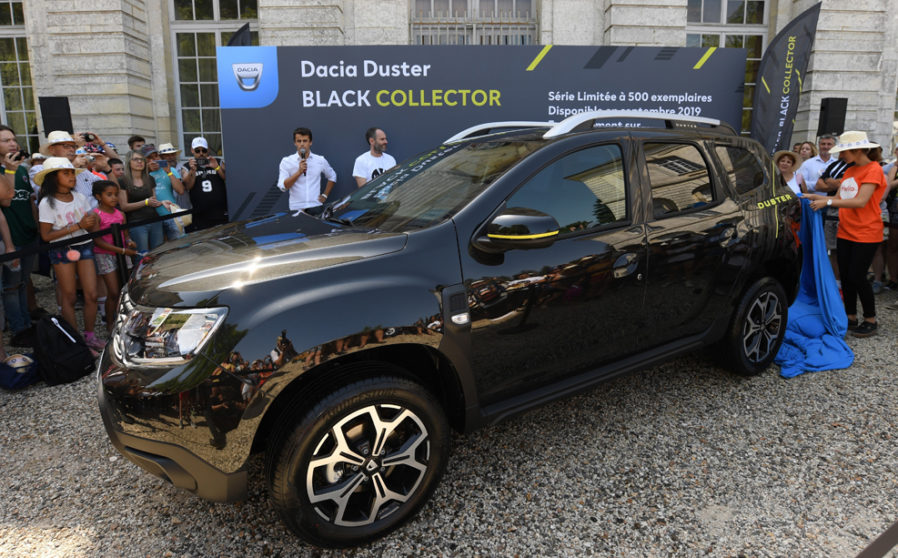 Boulogne-Billancourt, July 1, 2019 – At the annual Big Dacia Picnic, held this year at Chaalis Abbey in the Oise department north of Paris, Dacia revealed the new ultra-limited edition Duster Black Collector to its community. The event has become an annual highlight over the last ten years, drawing some 10,000 members of the Dacia community. This years’ participants enjoyed a range of family activities together, and also got to test drive the 4×4 version of Duster.

Based on the Prestige trim level, Duster Black Collector boasts unique styling giving it a “stylish adventurer” look. The limited edition features metallic black paint and exclusive strips outside together with protective mats and a Focal audio system inside. Equipment levels are more than generous, with a hands-free card, multi-view camera and multimedia screen compatible with Apple CarPlay™ and Android Auto™.

Available purely as a 4×2 version with a 1.3 TCe 130 PF petrol engine, the limited series will be marketed in France in 500 units with a numbered door sill underlining the car’s exclusive nature.

And in a first for the brand, reservations for the limited edition model will be online only. Be sure to visit the duster-blackcollector.dacia.fr website in September.

The French singer Jenifer, having made eight albums and featured as a jury member on the TV shows The Voice and The Voice Kids, regaled the attendants of the Big Dacia Picnic with a concert of over an hour. Seven Dacia Talents, artistes from the Dacia community, who delighted the crowd with music, dance, song and magic did the opening act for the artist. This year, seven individuals picked from among 17 applicants were coached individually and supported by Jenifer. Once again this year, the Big Dacia Picnic put on an exceptional show for the Dacia community, which remains as committed as ever.

Leyshon Flint & Sons makes every effort to ensure all prices and vehicle details on this website are correct. However, as these are used cars, the standard specification can sometimes differ from that shown. Please satisfy yourself that a vehicle has a specific feature that is important to you before purchasing, our showroom sales staff will be happy to assist you. Prices, offers and details of vehicles are subject to change without notification.

**Class 4 mot on this vehicle Only free mot for the exact person who bought the car , for however long they own it, vehicle will need to be in there name No repairs covered or any think bar cost of mot Strictly just the mot price If vehicle taken away after a failure is issued , mot retest fee of £19.99 Only x1 per year on time

All calls will be recorded for training and monitoring purposes.